In a historic effort to protect one of the largest expanses of open land in the region, the 2,445-acre Tres Hermanos Ranch in Chino Hills and Diamond Bar is now under the ownership of the Tres Hermanos Conservation Authority (February 2019).

The Tres Hermanos Conservation Authority (Authority) is a joint powers agency with representatives from the cities of Chino Hills, Diamond Bar, and Industry. The purpose of the Authority is to coordinate the overall ownership, maintenance and use of the 2,445-acre Tres Hermanos Ranch property through the collaborative efforts of its Member Agencies.

The Authority Board meetings are held the third Wednesday of the month at 6 p.m. in the Windmill Community Room at Diamond Bar City Hall, 21810 Copley Drive, Diamond Bar, CA 91765.

Consistent with the Governor’s Executive Order, members of the public are encouraged to participate and address the Authority during the public comment portion of the meeting via teleconference.

Members of the Authority and limited staff may be physically present for this meeting.  If you would like to attend the meeting in person, please note that face coverings are required to be worn at all times.

Agenda packets and minutes are available in the Online Records Library. Supplemental documents including handouts, public comments and speaker cards are appended to the end of the agenda packets.

March 27, 2019 - A press conference was held on the Tres Hermanos Ranch property recognizing the new Tres Hermanos Conservation Authority. Representatives from each of the three cities was in attendance

Reconstituted Tres Hermanos Conservation Authority - During a special meeting held at 5:30 p.m. prior to its regularly scheduled meeting of February 5, 2019, the Diamond Bar City Council unanimously voted to approve a settlement agreement that resolves long-standing concerns regarding the future of Tres Hermanos Ranch.

This agreement between the Cities of Diamond Bar, Chino Hills and Industry brings to a close a 15-month legal battle that involved litigation challenging the sale of the Tres Hermanos Ranch from the Industry Successor Agency to the City of Industry and the Master Lease which contemplated the construction of a large solar generating facility on the 2,450 acres of undeveloped open space located along the eastern edge of the city between Diamond Bar and Chino Hills.

The City Council's for Chino Hills and Industry also approved the settlement agreement on February 5, 2019. 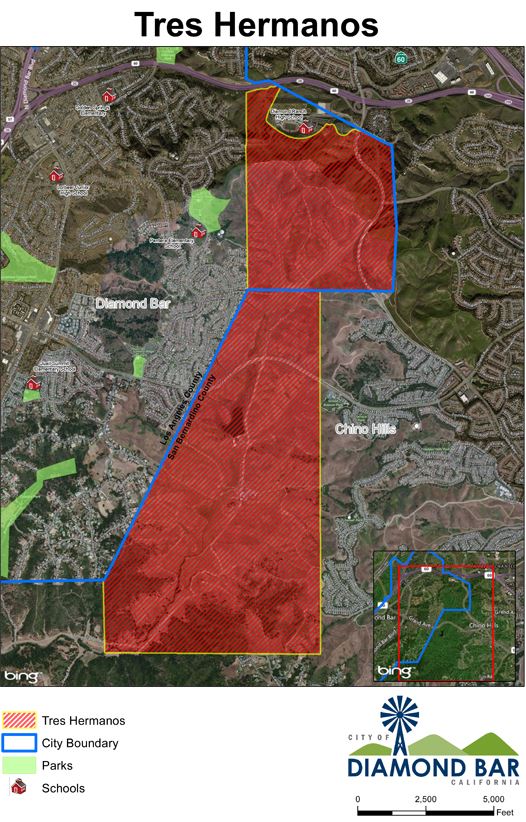 Tres Hermanos Ranch is 2,445 acres of undeveloped open space located along the eastern edge of the city between Diamond Bar and Chino Hills. Approximately 695 acres, or 30 percent, of the property is within Diamond Bar; the remaining 1,750 acres are located in Chino Hills. The portion of land within Diamond Bar is located northerly of Grand Avenue and is visible from Diamond Ranch High School.

Tres Hermanos Ranch is owned by the Tres Hermanos Conservation Authority, a joint powers authority with the cities of Chino Hills, Diamond Bar and Industry.  The City of Industry transferred to property to the Authority on February 11, 2019 as part of the settlement agreement between the three cities.