The City’s annual budget facilitates compliance with all legal requirements for General Law cities in the State of California and also complies with the Governmental Standards Board financial reporting requirements and audit standards, as well as with the fiscal directives of the City Council. It also serves as an operating guide for administrative staff in the management and control of fiscal resources and used as a communication tool for citizens who wish to understand more about the operations and costs incurred by the City. 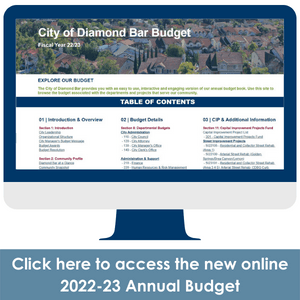 The City has launched its first online, interactive budget platform.

This new platform called OpenGov, is designed to allow residents to explore the City’s latest fiscal year budget in a visual, interactive, and easy-to-understand format.

The City’s fiscal (or budget) year begins on July 1 and ends on June 30. In April, city officials begin to plan for the coming year by developing goals, objectives, and strategies to meet the needs of the community. Based on these objectives, the City’s Finance Division compiles revenue estimates and requests operational plans from each city division. From this information, a preliminary budget is developed.

The preliminary budget is later reviewed and debated by Council and other officials. Public hearings are held to gather more information and debate particular budget points. Work sessions are held to find solutions to budgetary problems and concerns. By June, the Finance Division prepares a final budget and presents it to the Council for approval.